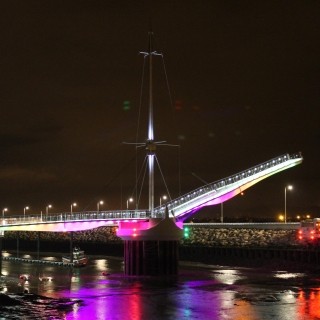 Lighting Technology Projects has completed the illumination of Pont y Ddraig, a new 60m pedestrian and cycle bridge that spans over the River Clwyd at Rhyl harbour.

Linking existing buildings and proposed developments to either side of the harbour, the bridge is an iconic structure and a distinctive attraction drawing visitors to the area.

Designed by Ramboll and constructed by Dawnus, Lighting Technology Projects was approached by the latter to provide lighting solutions to the new bridge.

The invite to play an integral part in this large-scale redevelopment of Rhyl harbour came following a recommendation from Andrew Marginson of Ramboll, due to LTP’s lighting efforts on the award winning Jarrold Footbridge in Norwich.

LTP was asked to devise a task lighting scheme to the bridge deck area to satisfy lighting levels as per BS EN13201-2 2003 to a luminance of level S3 or higher, while providing the required longevity of operation in the hostile saltwater environment.