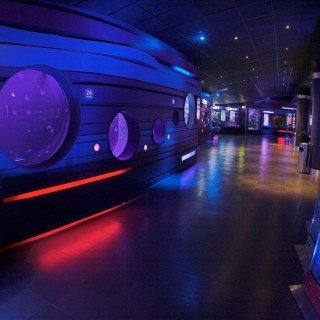 Lighting Technology Projects has commissioned and programmed an intricate illumination scheme at The Deep in Hull, the world’s only submarium.

Having initially supplied above tank and scenic roof lighting to the marine centre prior to the grand opening, LTP was invited back to work on the new £6.8 million exhibition, The Twilight Zone.

After ColorKinetics iColor Cove EC fixtures were specified and installed by DHA’s designer Peter Fordham for their low light intensity, the team were able to precisely programme the system via ColorPlay software, enabling each luminaire to have its own colour changing patterns.

It was important that the space was sufficiently dark both for its exotic residents and also so visitors could get a real feel for the atmosphere, mystery and drama of the bottom of the sea. Subsequently dark blues, purples and rich UV hues were selected as the predominant colouration within the attraction.

The LED strip cove lights have successfully provided the aquatic exhibition with the intriguing and engaging environment desired.